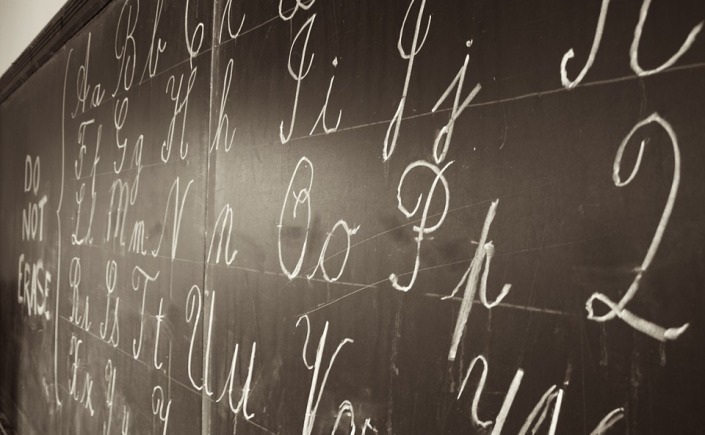 The blackboard takes up a sixth of one of the walls in a high school classroom. Its edges are hazy with chalk dust the janitor missed when wiping down the board on his rounds through the school. (He wipes down so many boards; he can’t be responsible for cleaning every inch!) In front of the blackboard sits the teacher’s large desk, and then the uneven rows of student desks, and across the room from the board, the wide window looks out onto the basketball court, its hoops missing their nets, and, beyond that, the vast lawn where the kids gather before and after school.

Though the blackboard’s mostly clean now, everything ever written on the board still lives in a room behind it. It’s like life. We often experience, often remember only the surface. Not only that. Where the board offered solely brief snatches, the room holds entire stories, patches billowed out into fat bodies, wholeness. (Or does it?)

Yes, Joey loves Janice. But it doesn’t work out. The two share choir, Joey standing diagonally one step higher. The conductor wonders if Joey has undiagnosed curvature of the spine. From where the conductor stands, Joey’s body leans to the left (really Joey’s right) and hunches down a bit. But Joey’s only trying to sniff the coconut shampoo wafting off Janice’s brunette shag. * Joey follows Janice around, three steps behind like a servant. He carries her books to her locker. He waits for her at the doorway to each of her classes, then sprints to his own class, where the teacher usually writes him up for lateness. * One thing Joey loves about Janice is her meticulousness. Her skirt and blouse always match. Her knee socks never fall down. Her shoes never betray a single scuff. Every hair of her brunette shag stays in place, even in gym, where at the time Joey loves Janice the girls play volleyball. Janice is the best player. But even when she jumps up to spike the ball straight down over the net, her hair doesn’t bob a bit. * Janice lets Joey carry her books and follow her around like a puppy. But it won’t go any further than that. Janice knew Joey in junior high, too. At that school, they also shared a blackboard. The math teacher would spend the entire hour pitting one student against another, having them race through math problems on the board. Whoever found the correct answer first stayed at the board; the loser sat down. 24 x 16 or 192/12. Janice was so good she could go through the class one and a half times before making a mistake. * So, many times Janice competed against Joey. When she finished the problem they shared, 213 – 67 or the square root of 169, Janice would glance over at Joey, at her opponent. She noted what Joey did. He looked not at the board, where he should have been marking his answer, but at his fingers, on which he was counting. Like a little kid.

2. The situation adumbrates an ambivalent dichotomy.

But it doesn’t work out. Henry’s gay. Bob isn’t. Henry doesn’t understand how his gaydar could have gone so haywire. Henry and Bob play on the football team. (There’s no law says gay guys can’t play football.) They shower in a communal bathroom. When Henry first viewed Bob in nothing but a towel, he almost fainted. Uh-hmmm, he told himself.

5. The Great Beagle sits on top of his doghouse, clacking away at a typewriter. It was a dark and stormy night, he writes. Nonetheless, he continues, everyone rocked around the clock.

6. Is Ulysses the greatest book of the 20th Century, or is it simply a textbook for writers? Would any of you curl up with Ulysses for a cozy read in bed? Write a 500-word paper on this topic.

Ulysses is a textbook for writers. It teaches them stream of consciousness, how to fit an entire day into a novel, how to rip off a classic and make it new. The only great chapter is the last one, where Penelope gasps, “Yes! Yes!” and even more “Yes!” She instructs us how to live.

Hereafter followed, on this student’s paper, 447 instances of “Yes!”

Ms. Tippets, the English teacher, inflicts modern and contemporary poetry on her students: “The Emperor of Ice-Cream,” The Book of Nightmares. They understand none of it, and during class, they text each other or fly paper airplanes or doze with their eyes open.

Ms. Tippets does indeed suck dicks, though not donkey dicks, not green ones, sometimes not big ones. Her students know nothing about it. In dark hallways of smoky bars, late at night when she can’t sleep. Her long cornflower-blue fake nails graze the man’s denim thigh where she strokes it. He grasps the nearby door jamb with one hand, smokes a cig with the other.

After a few hours of blow jobs, Ms. Tippets, her tongue swollen and mouth and knees sore, goes home and falls asleep as soundly as a jackal after the hunt.

This could say something about the woman’s lack of fashion sense. Or it might say she sweats/reeks/strides/swears/straddles like a man. The equivalent opposite? Your dad wears polka-dot high heels.

10. Joey ends up with Henry. They live platonically ever after. Janice becomes a prima ballerina, falls in love with the audience, never marries. Her swollen joints and exhausted tendons end up in a tacky nursing home. E = mc2, upon which so much of physics is based, turns out never to have been proven!

11. STORY no longer exists, someone has written in chalked-over letters on the board. The “someone,” a writer, has been sending out her stories for months, years, now decades. Enticing stories. Stories about love affairs and plots against the world and IRS agents siphoning off the dough and irresponsible citizens gumming up the rings of Saturn. To publishers of magazines and short story collections and novels. Who return them. To agents so uninterested they never even shovel her submissions into the trash, but leave them sitting, coffee-stained and Danish-sticky, in a pile on the corners of their desks. Will no one ever read her stories? When she goes to the movie theater, she notices how empty the auditorium has become, how talk resounds clearly in the empty room, how very few people (mostly oldsters) even watch new movies anymore. STORY is dead, she writes, and she means it, in the same way someone else once wrote, GOD is dead. It’s that significant.

Yet even this (see above) makes a story.