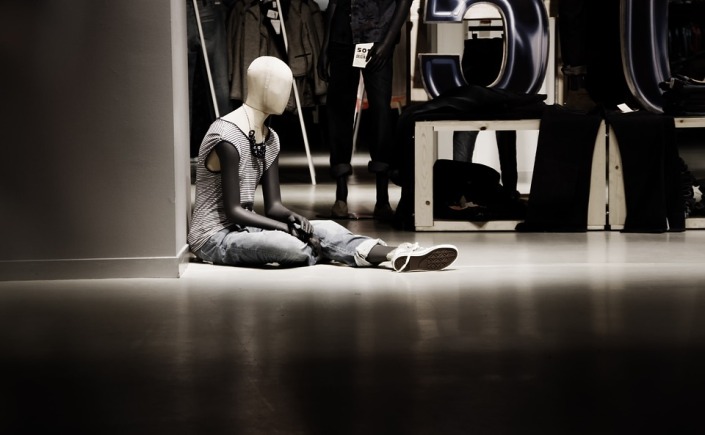 For Easter each spring, Doerflinger’s
sold canaries, cages suspended
from the pillars of first floor, from where they
looked over handbags and fake pearls, bars
of chocolates and plumed hats, men’s socks
folded into pairs. The morning the heat
went out, the janitor found the air
quiet, the birds on their backs and silent,
feet clutched in small eighth notes.
He took them to the alley and dumped them
like so much dust. Later when the sun
thawed the air, the birds, some of them,
called from under tissue leaves and branches
of cardboard. Inside again, the singing ones,
their throats warmed with drops of brandy,
chirruped to the showers of snow outside,
and even shadows vibrated with yellow,
those voices praising bonnets of flowers
and Arrow shirts, both arms crossed in front.

They stare from where they are left,
each standing on a chrome pole,
leaning on each other for balance
on the tilting wooden floor.
When no one is around,
they gather broken arms
and chipped fingers, try to assemble
better versions of themselves
so whenever the freight elevator
drags its chains and begins
its slow pull or the moon outside
lowers itself for a long look
the mannequins stop their collecting.
Some, with hips cocked left, some right,
some with toes pointing backwards,
one with its lone arm reaching.
All of them with hard lips pursed, eyes
looking everywhere at once.

The woman in the window
banged off plastic arms, twisting
the waist loose, then shimmied silk
dresses over hard shoulders and hips.
Arms reattached. The quick zip.
She loved the heads the best, the way
she could remove the skull cap,
reach in to adjust the backs
of the eyes, then face them where they
needed to look. In spring, she’d strew
silk tulips, gardenias and leaves
linking them together. Outside,
shoppers stopped to peer through slips
in the grey muslin and vowed to return.
Inside the resin women stared
into the wall of glass, that vacant
wishful look—were they expecting
the men from the opposite window
to save them, their chiseled chins
glowing like lighthouses? The children
at their feet with their baskets
and bonnets, their bright maryjanes,
wondered, long after the curtain fell,
if anyone would notice them, see
how their hunger lingered long
after the light spilled
into the street below them.

Karla Huston, Wisconsin Poet Laureate (2017-2018), is the author of A Theory of Lipstick (Main Street Rag: 2013), winner of a Wisconsin Library Association Outstanding Achievement Award. She has published eight chapbooks including Grief Bone, from Five-Oaks Press. Her poems, reviews and interviews have been published widely, including in the 2012 Pushcart Best of the Small Presses anthology. She teaches poetry writing at The Mill: A Place for Writers in Appleton, Wisconsin, and serves on the author’s committee for the Fox Cities Book Festival as well as the board of directors for Council for Wisconsin Writers and The Mill: A Place for Writers.